Valley Fever is caused by species of the fungal genus Coccidioides (Onygenales, Ascomycota)

Coccidioides filamentous growth on solid media in vitro in the BSL3 lab (above left), arthroconidia by light microscopy (above right) and during an infection in human lungs (image form swjpcc.com)

How do people get sick from Valley Fever?

Coccidioides or Valley Fever infections result from inhaling fungal spores from desert soils. Once in human lung tissue, spores can travel throughout the body including to the central nervous system.

Where is Valley Fever found?

In the United States, Valley Fever is found in desert regions including Arizona, California, Nevada, New Mexico, and Utah. Recently, reports were made of Valley Fever infections in Washington state. 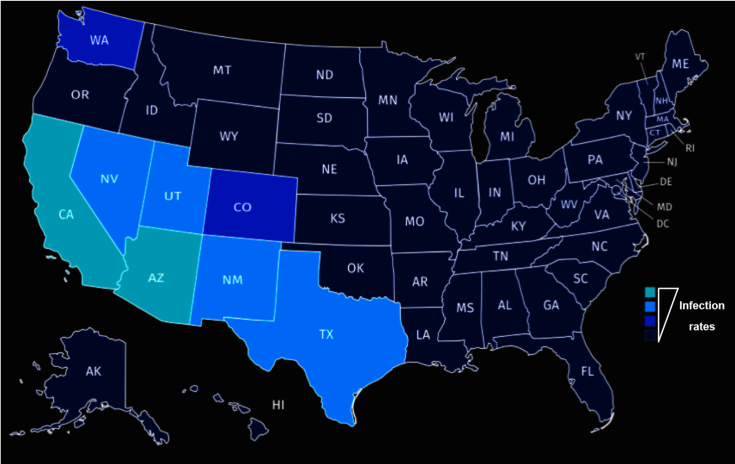 In Arizona the highest rates of infection are in Pima, Pinal, and Maricopa counties.

No, Valley Fever cannot be spread person to person.

What are the symptoms of Valley Fever?

Can you die of Valley Fever?

Yes. Many people clear Valley Fever infections over time while others become life threateningly sick. Our research is aimed at understanding what makes some Valley Fever isolates more virulent than others.

How many people are impacted by Valley Fever?

Rates  of infections are steadily increasing including infections in areas where Valley fever is endemic and reportable (Arizona, California, Nevada, New Mexico, and Utah).

How many people are affected by Valley Fever in California?

Where can I learn more about Valley Fever?

You can use the links embedded here to access research papers, governmental, and news websites. You can also learn more about Valley Fever on the CDC website,  Mayo Clinic website, and at the Valley Fever Americas Foundation website.

What kinds of Valley Fever research are happening at UCSF/UC Berkeley?

The questions our research group are interested in include:

How do genomes of Coccidioides isolates within a given population differ and how do these differences result in virulence?

Why do some Coccidioides strains from soil infect humans while others do not?

Why do some people clear Coccidioides infections while others die from infections of the same isolate?

How can we strategically identify drug targets for novel Valley Fever vaccines and therapeutics?

This project involves using whole fungal genome sequences to assess how much molecular diversity resides within populations of fungi that infect and can kill humans. A second goal is to identify genes in the genome that enable human fungal pathogens to colonize and kill their hosts. Together this information will help guide drug development efforts for Valley Fever.